Cowls made for oldest daughter, Missy A, and her brothers W and N. 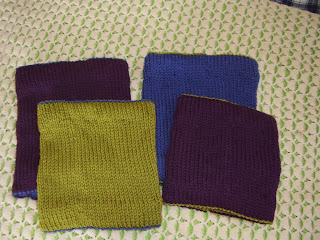 Evil Minion hat made for Miss A for halloween. She wanted to be a 'girlie' minion 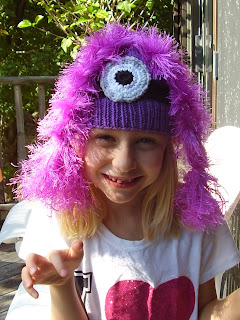 My niece is having a baby girl in November. I made a pair of longies 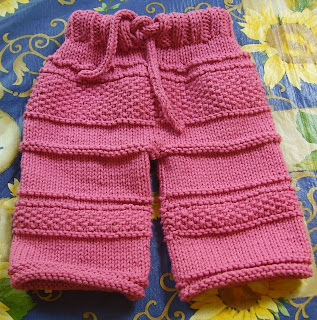 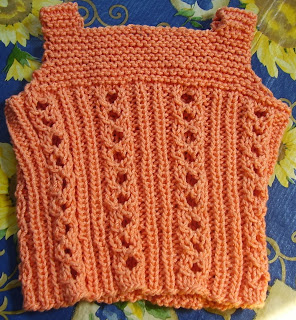 So back to blogging

I found that when I blogged it kept me on track with my knitting so I decided to go back to blogging,
Lots has happened. There's a new granddaughter thanks to daughter #2. Missy B is now 2 weeks old and a sweet little one. 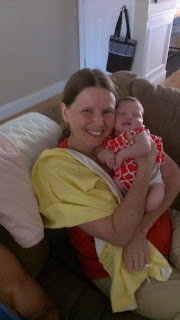 W is 9 yrs old and a wonderful kiddo. Smart, helpful, and still a cuddle bug. N is 7 and hysterically funny. He loves collecting stuff. All kinds of stuff. 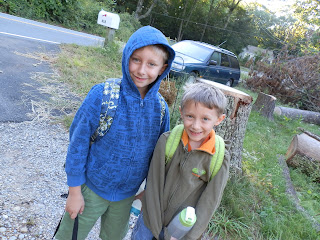 Little Missy A is 6 and starting 1st grade. She's all kinds of sassy and such a girlie girl. 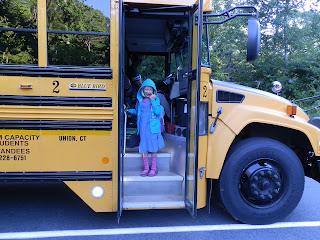 Petwise there's still Milo and Tanner. Joey disappeared a couple weeks ago at age 21. He had a wonderful life and we miss him every single day.

And there's been knitting
socks for missy a. toddler size 11 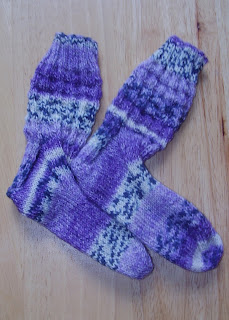 a minion hat for missy b to grow into 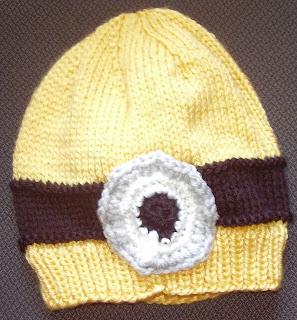 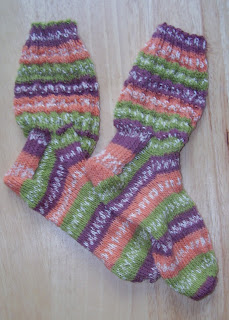 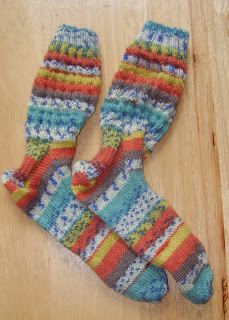 Oh the joys of dog ownership

As a new dog owner I've found that there's a secret society out there that I never knew existed. It's the society of dog owners. We nod at each other as we walk with our 4 footed friends. As Milo barks like a nut case at every dog he sees I explain in a voice a little louder than usual that he's friendly but loud. I know the names of all the dogs in the neighborhood but not the person at the other end of the leash. But that seems to be OK because we just love each other's dogs. 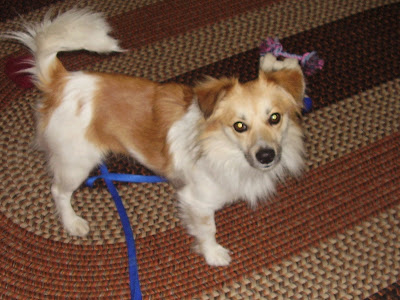 Milo says: OK so I bark a little but that's because I'm sooooo excited to live here with you.

Milo started dog training classes 2 weeks ago. The first week he spent 20 minutes barking and pulling at the other dogs and people. Finally after a while he started to respond to his name and was given a treat when he made eye contact. He was walking without pulling using a new collar and I went home with some homework to do every day. 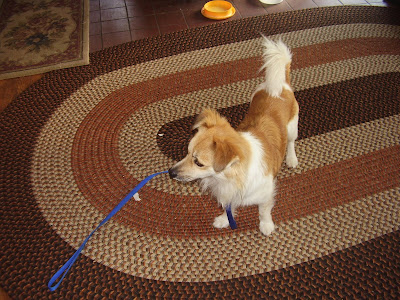 Milo says: I'll make all the eye contact you want Diane as long as you keep those snausages coming my way.

Last week he didn't bark at all, walked well, paid attention, and got treats like crazy. Our current homework is learning to walk in a heel position and recalling back to me ending in a sitting position when called. He's doing well with both so I think he's a pretty smart guy.

The only real ongoing issue we're having is that Milo barks like crazy when someone comes into the house, someone is in the yard (and of course my property backs to a town owned pond so there are always people in eyesight in the yard), and is fearful of strange men. I've been trying to get him to stop barking by giving him a treat when someone comes into the house so that he sees someones arrival as something good instead of something fearful. We'll see how that works out. 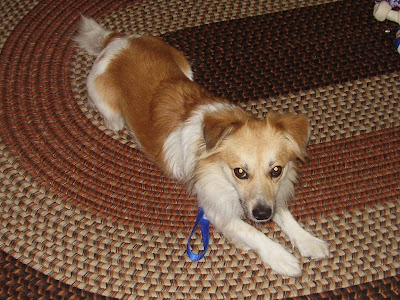 Well thank you for reminding me, Milo. Tanner is still with us but he's not hanging out upstairs anymore. Tanner decided a couple weeks ago that this was his house too and he wanted to sleep in my room on my bed just like he always did. At first Milo was excited over the entire thing. Now after 2 weeks he watches Tanner come in, leave, etc without any issues at all. I think they would be friends if Tanner way younger. But at least they are getting along without much chasing.

I've been working on a lap ghan for the cancer infusion center my dad used when he was under going treatment. We always joked that the ghans they had there were a little girlie so a manly man ghan is in process right now. I'm hoping to have it done by his birthday in the beginning of June but we'll see. Being someone with knitter's ADD it's hard to stay focused on a bigger project.

Happy Memorial Day to those in the USA. Take a minute to say a prayer for those who gave their lives for our freedom and thank their families who have suffered so much.

the humanitarian of the year awards ceremony any time soon. My track record lately is less than stellar ........

1) Tanner got out again over the weekend. I was a terrible foster kitty mama because I didn't look for him at all, didn't set out traps, didn't put out his beloved can food, and didn't call the cat group to let them know their cat was missing. He was out for 2 days and when he finally decided he had roughed it enough he came inside.
2) Milo got out too. Of course if you chase the dog he thinks it's a game and this 50 yr old asthmatic doesn't stand a chance against a little hyper 16 lb dog. Instead I swore, caught his eye, and walked the other way toward the door. Milo of course is nosey and had to see where I was going. I opened the door, he ran inside and I closed it after.

3) Speaking of Milo, I took him to the vet and didn't think to ask for a female vet when I made the appointment. Milo hates men so he almost bit the vet.

4) My brother broke up with his longtime girlfriend. We're happy because while she was a nice person the two of them together weren't a good combination. He's a giver, she's a taker, and she took everything she could. Of course the timing is awful because her mom is at the end of hospice care for cancer. She told my brother he was the worst person on the face of the earth. This is not true. I'm the worst person on the face of the earth because I thought she made up the entire cancer story. Well when you tell 99 half truths and whole lies how am I suppose to know the hundredth thing out of your mouth is true.

So that's it from around these parts. If the rain stops sometime this month I'll be happy. Wet dogs are no fun to be around. Still knitting and one of these days I'll grab my camera to snap a pic of all the baby socks for A4A.
Posted by Diane at 4:27 PM 6 comments:

Well I'd like to say that I've been busy but the truth of the matter is that this is mostly a knitting blog and since I haven't finished anything lately I haven't blogged. I've got lots of stuff that just needs to be blocked and ends hidden but haven't gotten around to it.

I've never been a dog person. It's not that I disliked dogs but I had enough to do with raising 4 kids to worry about a dog so I've always had cats.

Anyways, I've loved fostering the cats and kittens a lot. It worked out well because I'm always home. So a couple months ago I decided that when my own cats were gone I'd only have foster cats and would get a dog. I was researching breeds for characteristics weighing pros and cons of each breed. Treating it like a business decission.

And all the planning went right out the window when I looked on petfinder and saw a little guy named Shadow. I put in an application that night, made arrangement to meet him on Friday and ended up taking him home with me.

He was renamed Milo and he's been a handful. From what I've come to understand he was a puppy mill dog who is 18 months old. He has limited social skills. Every household sound makes him bark. Every person who walks in the door sends him barking. He's a bundle of nerves. But already he seems to be doing better so we'll just work together to give him everything he needs to be a part of our family.

Of course not everyone thinks highly of Milo. This guy has been checking him out from a distance.

They said Milo was good with cats but other than being in a foster home for maybe a day or two with cats I don't think he had any contact with them. Joey of course has had no contact with dogs. Since it's warm and Joey is outside most of the summer things should shake out ok.

I still have Tanner. He's been sick with a uri so antibiotics twice a day for him. He's been hanging on the 3rd floor since Milo got here and wandering down every so often. Milo is only on the main level and my room so he's not upstairs. The way my house is set up there's a catwalk/loft area over the living room with a circular stair case to the living room. So Tanner hangs out mostly on the catwalk looking through the railing at the dog. He'll walk down the circular stairs and sit just out of reach. I'm so proud of Tanner; he's come such a long way. Now if only he could get adopted.

So that's about it. Never a dull moment around here anymore.
Posted by Diane at 12:11 PM 7 comments:

I still have my foster guy Tanner. He's my buddy and pal since we spend about 17 hrs together every day. He follows me around the house constantly so my hubby jokes that it's Diane and her shadow.

I love this guy. So imagine my shock when he followed hubby out of the slider Friday at around 11 pm and decided not to come back home for the weekend. OMG I felt like such a kitty mama failure because although he's technically not my cat he's my baby. We spend a couple hours looking for him on Friday night and I actually had him but he sunk both sent of back claws in my leg and took off. We left our cat Joey outside figuring that Tanner would see his friend and stick around.

Saturday morning D3 saw him on the front porch when she was leaving but he took off and she couldn't spend any time looking for him since she was on her way to work. By the time my hubby and I got up he was nowhere to be found. Saturday afternoon FFCC dropped off a couple traps which we set. Traps empty Sunday morning. Pouring rain on Sunday and thunderstorms on Sunday night but no Tanner. I was getting pretty worried.

My son is a night owl so around 2 am he was going down the hallway and looked out on the front porch. There was Tanner sitting next to the trap with my other cat Joey. S1 opened the front door and distracted Tanner with a toy long enough to grab him and bring him inside.

So this morning when I woke up Tanner was sitting right outside my bedroom door happy as anything to be back home where it's warm and safe. I'm happy he's home.

As Joey naps on the loveseat he seems blissfully unaware that he is now in dangerous gator country. 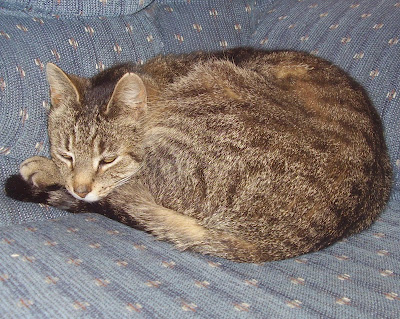 Yes there are 3 gators on the couch just feet away from him. How could he not be concerned. 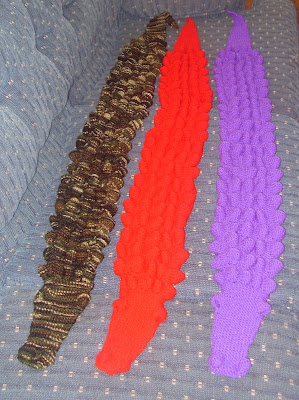 Aren't these just so adorable? The pattern is from Morehouse Farms. Since there are for the grandkids (who's mom doesn't hand wash anything) I used red heart sports weight yarn.
W wore his to school today and his teacher went nuts for it. Actually called my daughter to rave about it. She said, "Oh you'll have to keep it and pass it down to his siblings." My daughter mentioned that each child had one of their own. Seriously what terrible grandma would only make on gator scarf and expect the other kids to wait to use it?